Passion with a history

Robert Wooten is a third generation beekeeper. His grandfather Homer Park was a pioneer in the queen rearing business. Robert grew up learning the family business from an early age he can remember following his parent Shannon & Glenda Wooten around, or sneaking out to the warehouse, riding in the trucks moving bees and grafting queens as soon as he could see larva.  After high school, Robert moved to Arizona to attend Universal Technical Institute where he studied to be a mechanic. Upon graduation he moved to Tennessee and worked on Volvo cars.  In the fall of 2006 Robert decided the family business was where his heart and future was at.  After working for his parents for 3 years he brought his best friend and future wife Amanda on board to work in the office alongside Glenda Wooten.

Robert and Amanda met in the summer of ’96 while entering high school, while their friendship grew Robert introduced Amanda to the world of beekeeping.  After high school Amanda attended college and started a Real Estate Career.  In 2010, Amanda started working at Wooten’s Golden Queens, Inc. in the office alongside Glenda Wooten learning all aspects of the bee business.  In 2013 Robert and Amanda tied the knot and in the fall of 2014 the 4th generation beekeeper Lane “Lil Man” Wooten entered the world.  2017 Robert & Amanda purchased the beekeeping business from Shannon & Glenda, and Wooten’s Queens & Bees, Inc was established. Shannon & Glenda are still involved with the beekeeping business but also own a cattle ranch they’re enjoying running.  Wooten’s Queens & Bees, Inc offers the same Park/Wooten productive queen, Nucs, pollination and honey as Wooten’s Golden Queens, Inc. offered. We look forward to continuing the same traditions the Park family has for years to come. 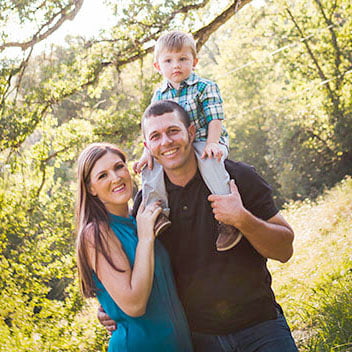 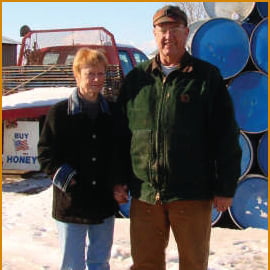 Steve Park has been picking the best, breeding the best and making the best for over 40 years and his dad did the same for 20 years before that. No matter what you are doing with your hives they have to be good honey producers to be strong and healthy throughout the year. Steve and Sharon operate over 10,000 hives in five states, ending up with most of them in Montana for the summer.

Steve Park Apiaries continually monitors mites, both varroa and tracheal throughout the year. They have found by using packages to make up for winter losses and to increase colony numbers, they have little to no mite infestation their first year. The break in the brood cycle leaves the mites no place to grow. You should consider ordering packages this year for a fresh start.

What makes Steve Parks queens head and shoulders above others, besides the good honey production, is their fast buildup. So, if your population gets small, they will recover and still make strong hives that same year.

Since the early 80’s, Steve park Apiaries has been hauling hives to Montana for honey production; back to California for almond pollination; producing queens and package bees for sale; and selecting the best queens. Steve Park Apiaries uses only their best producing queens for this cycle. If you buy Park Italian queens, you can rest assured that they can handle this type of stress. Steve Park Apiaries packages ARE NOT shipped. They are picked up in Palo Cedro, California only. To order, call 530-549-3500.

Daren Wooters is a third generation beekeeper. His grandfather Jack Park worked alongside his brother Homer Park mastering the art of queen rearing. Daren grew up learning the family business while working for his Aunt Jackie Park-Burris. After high school, Daren went to Universal Technical Institute where he studied to be a mechanic. After a few years working as a mechanic, Daren moved home and went back to working in the bees with his aunt. It was then he learned the honey bees were his true passion. Daren worked side by side with Jackie, learning everything there was to rearing the perfect queen, a Park Italian Queen. In 2007, Daren met Alissa and by the end of 2009, they had tied the knot. In 2011, Daren and Alissa purchased 1400 nucs and 50 hives from Jackie Park-Burris and started their own business, Wooters Bee Farms. They offer pollination, packages and queens. Alissa grew up in the city and knew nothing of the honey bee industry, in fact she had never been stung. After many hours of learning and many stings later Alissa is becoming a beekeeper herself. Alissa studied at Simpson University, earning a Bachelor of Arts in Business and Human Resources Management. She handles all the paperwork at Wooters Bee Farms. Daren and Alissa live in Cottonwood, CA with their two children, Brenden and Caitlin. 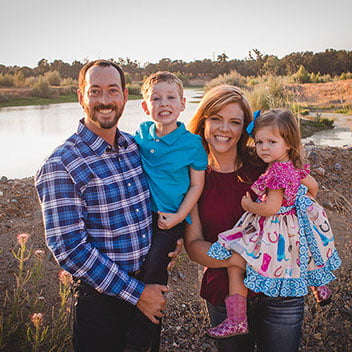 Wootens Golden Queens, Inc. was established 34 years ago, when Shannon went to work for pioneers of the bee industry, Homer and Lois Park of Park Italian Queens. He found a lifelong vocation and partner when he married Glenda, the boss's daughter. In 1974, they purchased a portion of Parks' hives ("the Big Nucs") and started producing nuc sides, queens, pollination and honey. In 1996, Shannon and Glenda took over the queen shipping. They also market for Steve park Apiaries, Jackie Park-Burris Queens, and Stayer's Quality Queens, cooperating together to produce Park Italian Queens, and shipping them throughout the United States and Canada. 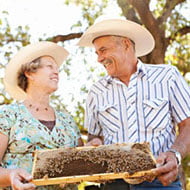 Wooten's continued involvement in state and national beekeeping organizations is reflected by each having served as president of California State Beekeepers Association, together receiving CSBA Beekeeper of the Year 1995. Shannon is currently on the California Farm Bureau Board as a Director, proudly having the distinction of being the only beekeeper ever to serve on the state board, and he is a Past President of California Bee Breeders. Glenda is a Director of the American Beekeeping Federation, and National Honey Board alternate representative. Their son, Robert, is also a part of the family business.

Wooten's Golden Queens produce 3 frame nucs, with no frame exchange building 1,5000 new frames every year, these nucs are kept in a 4 frame unit from June until offered for sale in March. These nucs produce honey in the summer and pollinate almonds in the spring to prove themselves. The nucs when sold, have their queen and 3 frames of established hatching brood. When an ample food supply is provided either by natural fathering or syrup and pollen substitute added, population growth increases rapidly. Honey production has been reported to be very substantial the first year. When placing these nucs into the customer's boxes and by working indoors, truck load lots can be made under any weather conditions.

In the early 1920’s there were no beekeepers residing in the Palo Cedro area. A beekeeper farm from Anderson had a bee yard on the Homer Park’s father’s farm. Homer loved to watch the bees. When he was eight years old he talked his father, Leo Park, into cutting down a bee tree for him. Leo sawed down the tree, but he left the bees for Homer to put in a wooden apple box. Leo did not want anything to do with bees. It was late in the fall so the bees did not have time to fill the box with honey and make a good brood nest to winter in so they were dead by spring. Homer then went looking for more bee trees and swarms. By summer he had two hives in apple boxes. Homer’s Uncle Teddy, who had 12 beehives, came to visit and taught Homer how to smoke the hives and how to work with the bees. He continued to catch swarms and would stuff cotton in his horse’s ears so she would not hear the bees buzz and then he could carry a swarm in a gunnysack on horseback.

When Homer started to Anderson High School he took Ag with bees as his project. The teacher, George Tyler, had bees so he taught Homer a lot about bees and how to build hives, supers, top and bottoms and frames. By the time he graduated he had about 125 hives and was raising a few queens. He continued to collect swarms and divide his hives in his spare time. He worked for Jack Wing, a beekeeper in Cottonwood, one spring and gain experience in raising queens and shaking package bees.

In those years, there was a lot of farming in the Palo Cedro area. The farms raised hay, had irrigated pasture and fruit trees. There was clover, alfalfa and star thistle for the bees to get honey from and there was a lot of Manzanita, Cascara bushes, wild flowers and other brush for the bees to work. In 1940 Homer had 300 hives, but at this time he sold 150 to his high school Agriculture teacher, as he needed money to get married.  In 1943 Homer and Lois Park bought 10 acres of land near the center of Palo Cedro where built their warehouse and home. They became full time beekeepers. Through the years the Homer Park bee business grew by making new hives and frames in the winter, repairing equipment and also by buying beehives from other beekeepers.

In 1962 they began selling hives to some of their family. By 1976 there were four more beekeepers in Palo Cedro, J. Park Bee Farm, Tollett Apiaries, Steve E. Park Apiares and Wooten’s Golden Queens. There were about 5,600 colonies and 7,500 nuc beekeepers settled around Palo Cedro until now in 1990 there are 10 beekeepers owning about 20,000 hives and 20,000 nucs. These beekeepers sell package bees and queens throughout the world. 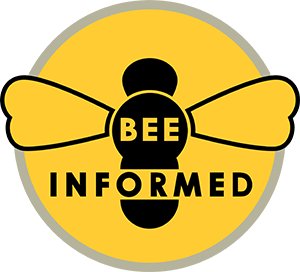 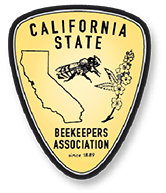